This realistic Saigon paintball shooting range is set up to give you a taste of real battlefield warfare, featuring bunkers, hills, forests, plains, and villages that are a cover for “soldiers,” or obstacles, for you to fight through.

At 10 AM there was an exchange of gunfire between two opposing forces. A group of youths wearing red armor and carrying guns tried to shoot back at a group of blue shirts wearing a similar type of uniform. The Saigon paintball shooting range in District 12 was witnessing a fierce battle. 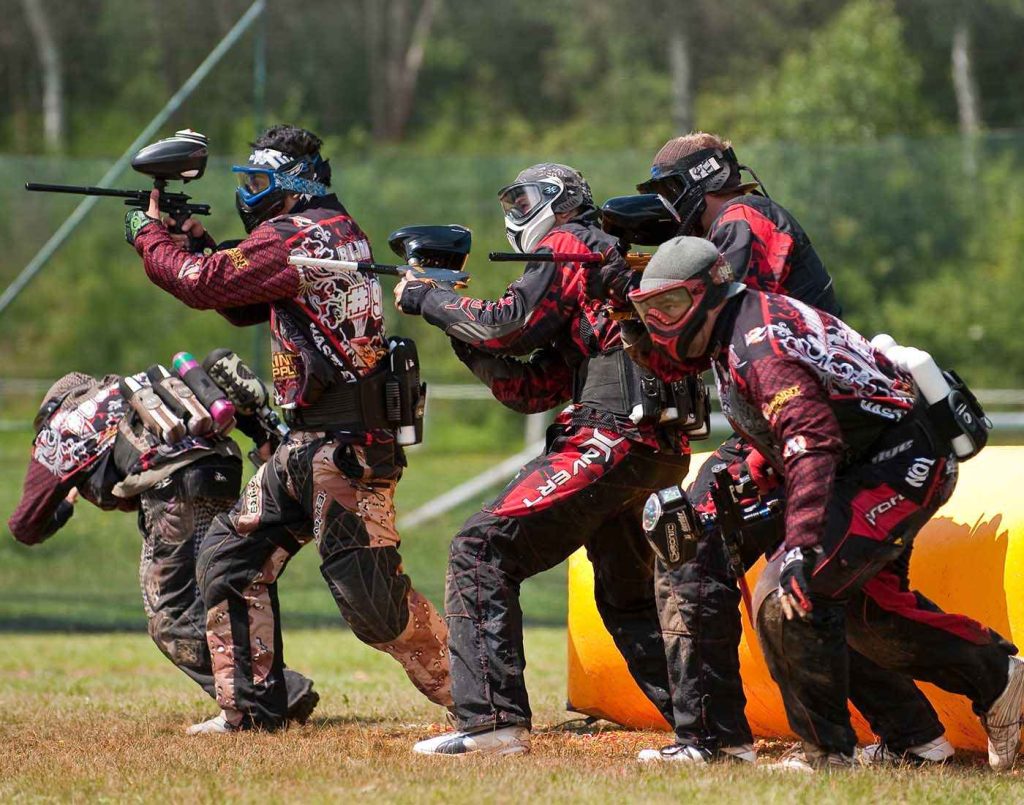 The warrior fought ferociously to pass on his shield to the next guy. He had to be handed back after only an hour of practice because he didn’t have enough time to pass.

The soldiers moved quickly from tree to stump, from obstacle to obstacle, alternating rows of bullets whizzing straight into the bunker and fuel depot, causing them to shatter and leave paint marks.

A moment later, the last two gunmen of the blue shirt faction slowly stood up, raised their hands above their heads, and walked out of the battlefield. They’re the ones who’ve just been shot in the head and told by the referee to stop the game.

At the end of the battle, the victory belongs to the team that played the best and had the most experience.

Playing paintball is like a mock battle. It lasts about an hour and a half, but you need to start it when you have enough members to form. Depending on the match, the number of members can vary.

Each team must have at least 5 people, and they will be equipped like real soldiers, including guns, armor, goggles, masks, radios, and plastic daggers… The guns used to shoot the paintballs are usually semi-automatic. A ball is made of flour and coloring. 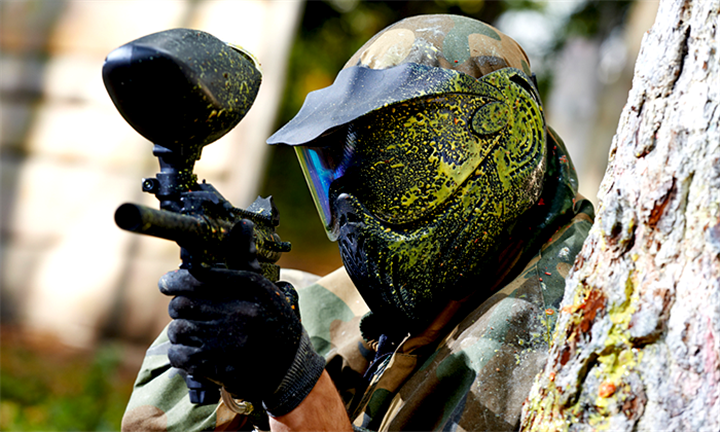 Are you concerned about whether you have enough combat skills? Don’t worry! Before actually rolling and crawling, you will be trained in basic military skills. During the match, the referee and supervisor will always secretly follow you to ensure your safety, and to make sure you don’t…cheat.

It is a game that helps you promote teamwork, exercise strength as well as train to be sharp and quick to react in all situations. To win a fight, the people who are in charge of a team must work together to devise a plan of attack, and all team members must put aside their egos

The gameplay for these games is very similar to the real thing, and each scenario gives you the opportunity to perform actions such as killing enemies, rescuing hostages, stealing the flag, or assaulting a location. You will be killed and forced to leave the game when hit by a bullet and the bullet breaks.

If you are hit but the bullet doesn’t break, you can still continue the game as normal. Of course, the referee’s decision is always final. Every sport has its rules and referees to ensure fair play. These three penalties are yellow, red, and black. When you receive a red card from the referee, you will be removed from the game immediately.

People will think that this fake battle game is a very hard one to play when they first hear it. But only when you’re immersed in a fake battle, can you feel the excitement of the game and the confrontation with the opponent to win is really attractive.

One point to remember in this game is that you need to follow the safety rules set by your instructor, especially the rules concerning the use of the paintball gun and your protective equipment. Don’t get caught off guard during a paintball shoot. It’s easy to injure yourself, your friends, and your opponent. The average price of a 60-minute paintball shoot is about 120-140,000 VND, including rental fees for the field, uniforms, guns, and ammunition.
Despite being carefully instructed by the coach on how to play, new shooters will inevitably be confused. 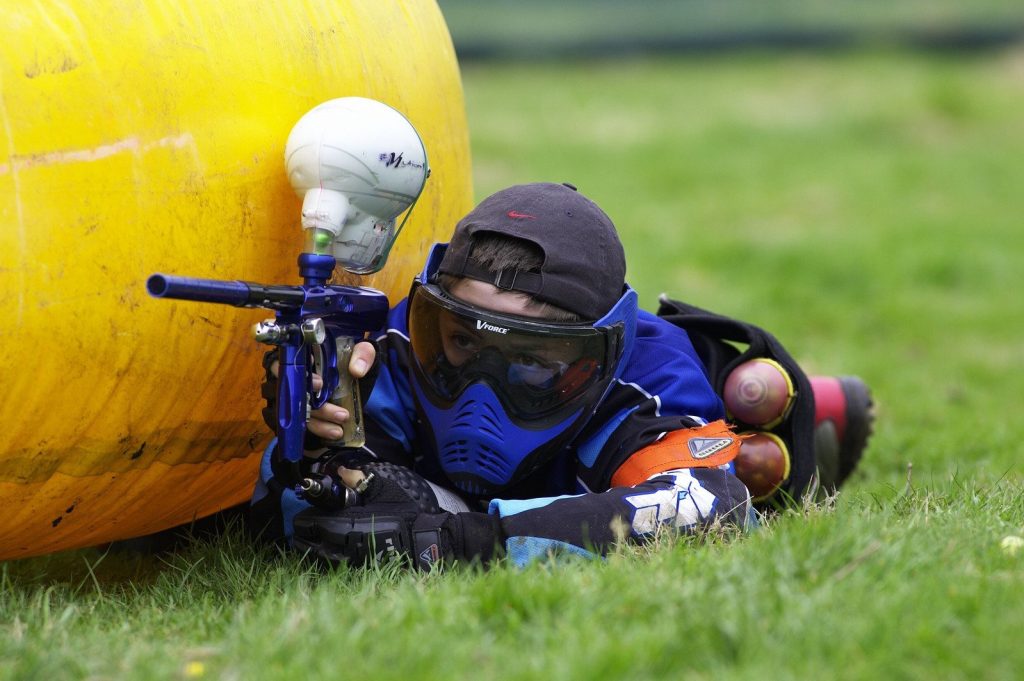 Paintball battle tips from my own experiences

Never take off your protective mask while you’re outside in the yard. Guns can accidentally “get lost” towards you at any time. Although wearing a mask is very hot and stuffy, it’s a protective device for your safety. If you feel gassy, you can signal to pause so you can go back inside and recharge. Moreover, the referee always gives the order to take a break in the middle of the game so that the soldiers can refill their gas tanks before continuing to fight.

Before going to battle, make sure you know how to load the ammunition, steal the trigger, and lock the cartridge because if you don’t, it’ll cost you. Never hesitate to ask the instructor about your weapon or to practice with the range before competing.

Getting hit by a paintball gun won’t hurt or hurt you, only if you’re wearing armor and protective gear, of course. You may feel a little bit hungry, but that feeling will pass when the game is over.

You should wear dark colors so that they won’t see you and have a difficult time hitting you. Wear comfortable athletic shoes that can handle rough terrain as you’ll be running, rolling, crawling, and crawling a lot on

Always look around the field and don’t just look at one spot because enemies can hide anywhere. There are many friends who thought they had found a safe place to hide, so they lay down to breathe, never expecting the other person to stand in front of their back, and of course, the following sentence would be “you have been arrested, raise your hands. head!”

It would be very foolish to stay in one place for too long when you are being hunted by the enemy. As long as you stay in one place, less likely you are to move to another place undetected.When you see bullets falling on the field, never pick them up and put them into the gun. When loading in a hurry, the gun is very easy to jam, making you no longer a combat weapon. Naturally, your ability to get off the field will be sooner.

The captain needs to be chosen, and the coach needs to be obeyed. Maybe the captain is tactically or very inexperienced, but he is the one who steers the team in one direction. Imagine a team of 5 with each person having a strategy, what would it be like?

The two most commonly used tactics are division and overpowering. For the split strategy, your team will ambush evenly on the field, not concentrated in one place. With this option, you will observe the entire playing field to easily detect the opponent’s weaknesses.

Meanwhile, the tactic of overwhelming the force requires the entire team to focus on defense and attack in one direction, leaving only a small group to defend in the other direction.

In each match, your team must prepare a main strategy and a backup strategy, in case the original battle plan is destroyed by the opponent, causing the whole team to panic.

previousHow Can You Hire a Personal Driver in Vietnam