Home » The Dos and Dont’s at a Vietnamese Funeral

The Dos and Dont’s at a Vietnamese Funeral

The Dos and Dont’s at a Vietnamese Funeral

Funerals are events that you would prefer not to ever have to experience. Depending on where you’re from, they can either be viewed as a sad event or a celebration. Here in Vietnam, there are certain age-old practices and routines that you may not yet be aware of. Take note of these Vietnamese funerals dos & don’ts to make sure you remain respectful and beyond reproach during this delicate mourning period.

What to do at a funeral in Vietnam

This is a sign of respect for the deceased and his or her family members. The most common gift is flowers and in Vietnamese culture, the most appropriate flowers to gift during funerals are white flowers.

One of the most beloved flowers in Vietnamese culture is the white lotus, which is used as a metaphor for the cyclical nature of life, symbolizing purification and regeneration. 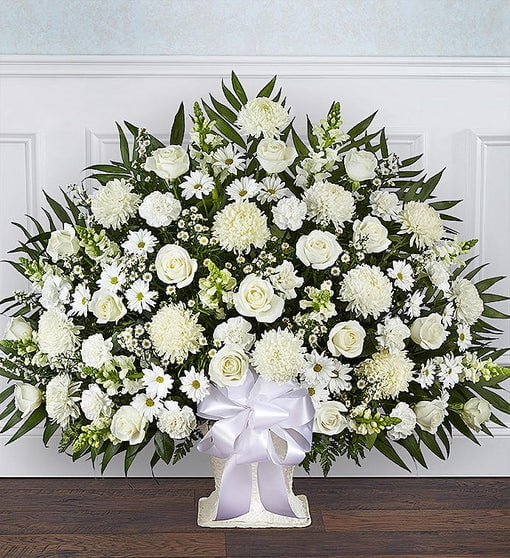 Show up in black at Vietnamese funerals

Since family members wear white, others in attendance are expected to wear black. Besides being one way to distinguish family members from guests, white is also worn by family members because they believe it will earn merit for the deceased and the family. 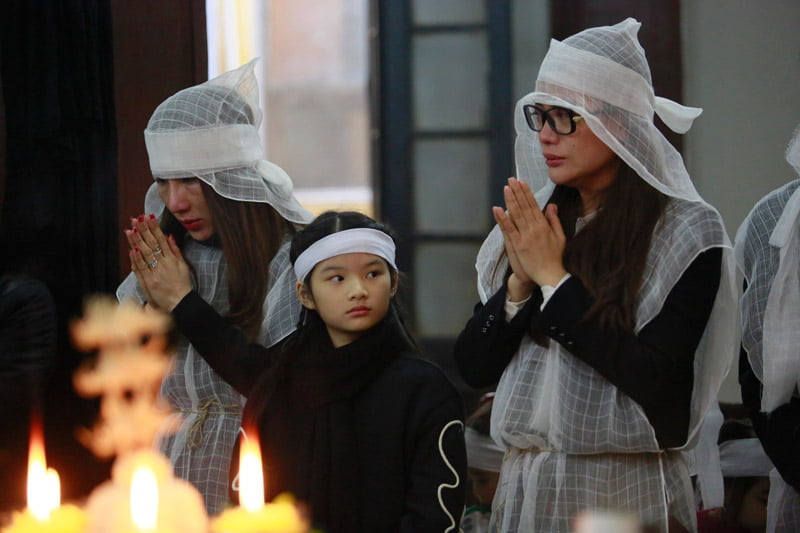 This might seem a little puzzling for foreigners but in Vietnamese culture, certain procedures are done in odd numbers. For example, when lighting incense, go for one, three, or five sticks, with three being the most ideal. This also applies when you bow your head in front of the coffin. Hold the incense sticks in your hands and bow once, thrice, or five times.

Vietnamese believe that odd numbers are ‘lucky’ at funerals. However, be aware that holding three incense sticks at any other time might be considered macabre or unlucky. Take, for example, the residential towers formerly known as Thuan Kieu Plaza.

To the Saigonese, the three towers closely resembled the incense sticks one might burn to honor the dead and thus were cursed for failure from architectural conception. 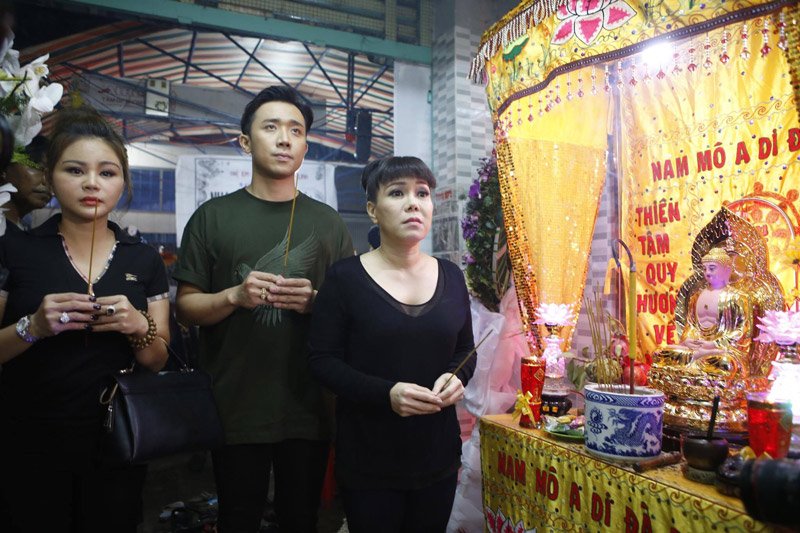 What to NOT do at a funeral in Vietnam

Do not attend if you are pregnant

The Vietnamese believe that during cremation, the spirit of the deceased is freed from the body and may enter the unborn.

This may seem like a no-brainer but it is very important to note that funerals in Vietnam are a somber event. Therefore, it is best to avoid smiling or laughter as it will be considered extremely rude.

Do not make any noise

Be as silent as possible and speak only when spoken to. Keep your volume low and ensure your phone is set to silent. The last thing you want is to attract unwanted attention to yourself, especially when you’re a guest.

Watch how the other local attendees behave at the funeral and just follow what they do. Most of the time they will guide you on the steps and procedures so you will have nothing to worry about.

Do not light incense if you’re menstruating

Another one that may seem odd to a non-Asian. It is believed that lighting incense while you’re menstruating will bring bad luck to the deceased. What you can do, alternatively, is to stand in front of the coffin, hold your palms together and bow your head an odd number of times.

In Vietnamese culture, the deceased are accorded the same respect as the living, this is why it is perfectly alright to take pictures during Vietnamese funerals, an act that is frowned upon in most western societies.

Because of the many different ethnic groups in Vietnam, there will be some differences in terms of customs and procedures. However, most of them share some similar practices, which will be listed below.

The body will first be cleaned by a professional, then dressed in a new set of clothes, before the body is put into a casket. If at that point, the casket is not available yet, then the body will be placed on the deathbed with a small knife positioned on the stomach. This is meant to protect the spirit while waiting for the casket to be prepared.

Another practice is to put a pinch of rice, with three coins in the mouth of the deceased. This is based on the belief that “being born from the earth, one must return back to the earth”.

When the casket arrives, it will usually be placed near the center of the house, ideally in the living room. An oil lamp will then be placed under the casket throughout the entire duration of the wake. This act is meant to keep the spirit warm.

STEP 2: The broadcast at Vietnamese funerals

Black and white flags will then be hung, lining the route between the deceased’s home to the closest main street. The flags will be placed about 50 to 100 meters from each other.

These flags serve as an ‘announcement’ to the neighbors, as well as to nearby spirits that someone in the vicinity has passed away. It also serves the practical purpose of marking the route to the house for the wake attendees.

Also known as nhập quan, this stage consists of a final clean-up or beautifying of the body before it’s placed in the coffin. Water and alcohol are used for this process before the body is then dressed in new white clothes. Relatives of the deceased will be dressed in funeral clothes consisting of a white robe, oversized pants, and a pointed hood. 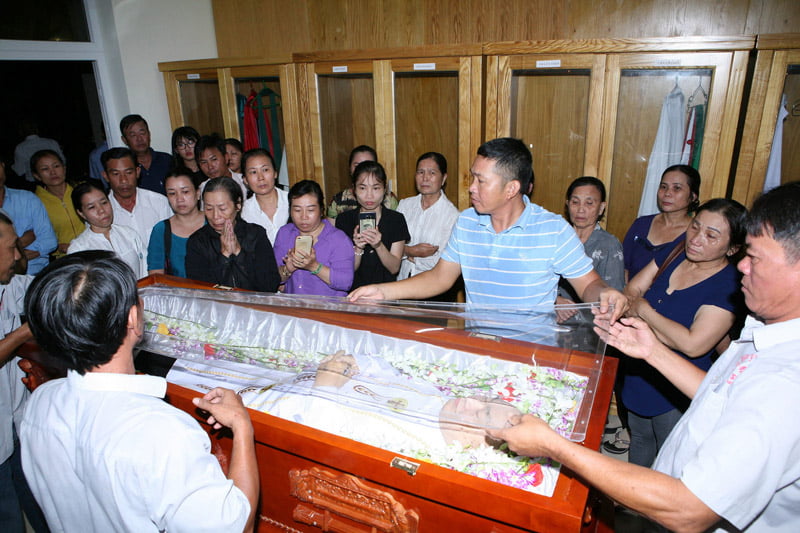 STEP 4: Arrival of the guests at Vietnamese funerals

At this point, the coffin will be ready for viewing and the guests will arrive to console the family, as well as to offer a final prayer. Guests usually don dark-colored clothing, and they will bring flowers and money to help with the funeral costs.

The wake typically lasts around three days, during which friends and associates can come at any point to pay respect to the deceased and the family. They will usually bring a pack of incense, and an envelope with some money in it.

These two items are given to the family as a form of contribution to the funeral process. After that, they will light up an incense stick, offer a prayer for the deceased, and bow. Two of the mourning family members will stand at both sides of the casket during this process and bow in return.

There will be a small area allocated nearby with some light food and tea so that the visitors can sit and talk after. Close friends usually stay and help with the funeral as much as they can, including running errands or helping to wash the dishes.

If the deceased worked for a company, they will usually send flowers, which will then be placed around the casket and brought along to the burial site. 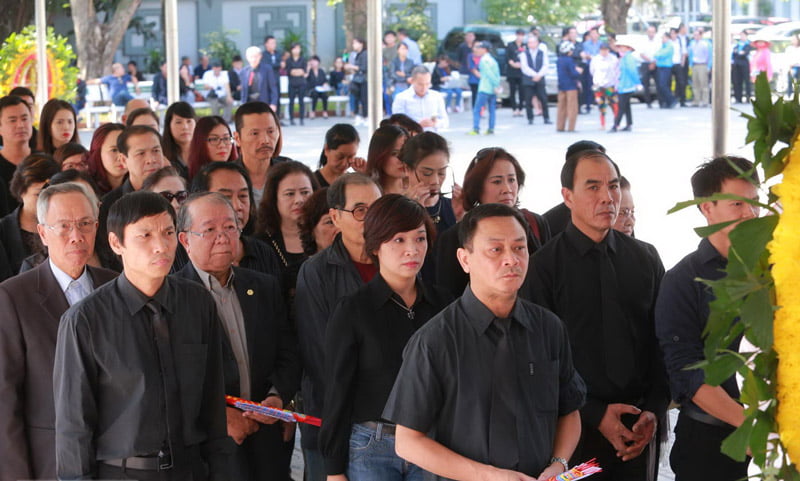 At the end of the third day, a team of about ten men will facilitate the next step, four of the ten will act as pallbearers. First, the men will perform a ritual to seek permission from local spirits to move the casket.

The casket will then be moved into a funeral car—a vehicle customized with large windows so that the coffin is visible from the outside. This vehicle will be part of a convoy made up of friends and family, and, depending on the popularity of the deceased, it can stretch up to a kilometer or two.

The convoy will consist of a ‘lead’ vehicle carrying two family members. One family member will hold a portrait photograph of the deceased while the other holds the incense bowl. Upon reaching the destination, another ritual will then be performed by the same men before the actual burial process.

Belongings of the deceased, such as clothes, will be burned near the gravesite, along with flowers and the mattress that was used as the deathbed.

As the convoy disperses, some close friends and the people who worked throughout the funeral will follow the lead car back to the house, making sure to follow exactly the same route as the earlier journey. This is done to ensure the spirit of the deceased will not be lost. This is also why the route is planned in advance to avoid one-way streets.

When they arrive back home, the house will have already been cleaned up and the furniture put back in place, usually by close friends who stayed to help, and the incense bowl will be placed on the family altar. Meals will be offered to those who worked during the funeral and to the men who performed the rituals. 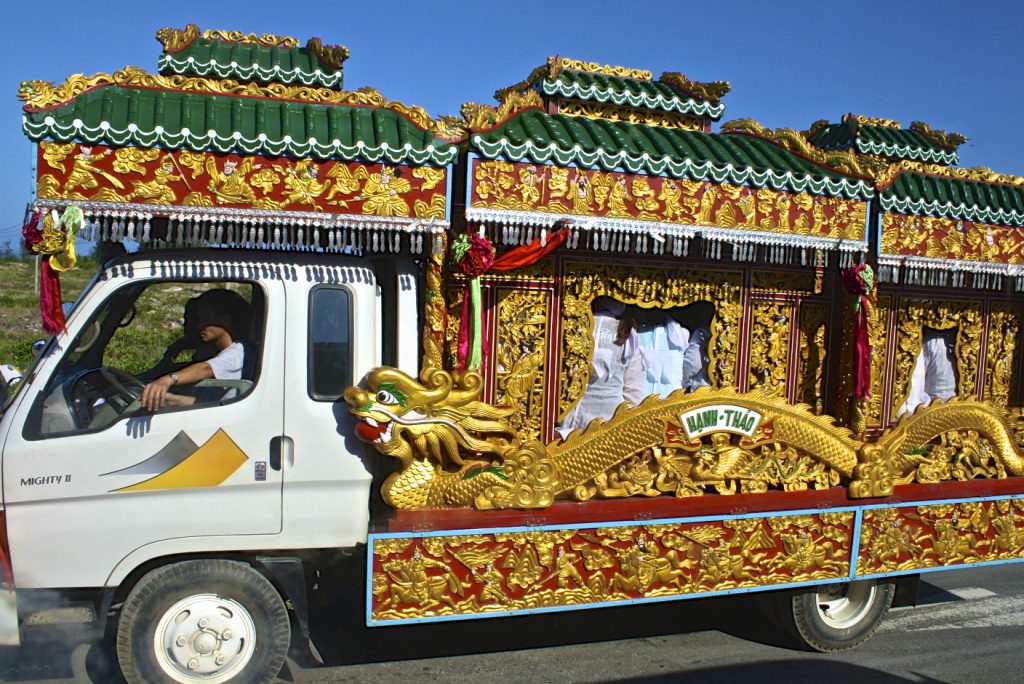 STEP 6: The mourning at Vietnamese funerals

Depending on the deceased’s position in the family hierarchy, the mourning period can last up to three years. During this period, there will be several restrictions imposed on the family members, including being forbidden to marry. This is usually more common among the more conservative families, but not as strictly adhered to by the rest.

The white clothes worn by the family members will also be placed near the altar and will be burnt after an allotted time to signify the end of the mourning period.

Knowing about Vietnamese funeral dos & don’ts can be an eye-opening cultural experience to avoid unwittingly offending your hosts and the dearly departed.